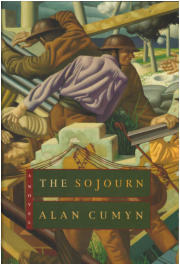 You asked me once, and so I’ll try to tell you, even this is not the worst of it. This is a sketch of “Fritz-boy,” whose charming face graces the sandbagged wall of one of the many communications trenches leading to the forward lines. It’s not much of a trench at that–even a short man like me must bend nearly double to traverse it safely. But it’s considered very bad form to pass him by without shaking hands, and terrible luck to either snatch his cigarette away or light it for him. I can’t say how long he’s been there, but everyone knows of him, and half the men here think they’ve felt him squeezing their hand in return.

“Ypres, Somme, Cambrai: the names are enough to tell you what happens to these soldiers, yet this is not a depressing book. It is bursting with goodness and love and decency…. The Sojourn is not a blockbuster. It has no linguistic pyrotechnics, no outrageous characters, no bizarre plot devices. What it has is solid research, excellent writing and a deep-seated passion for the exploration of an individual’s moral development.” Robin McGrath, The St. John’s Telegram

“It wouldn’t be right,” she replies, but in a 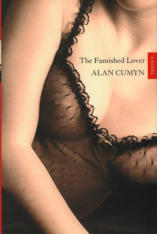 teasing, falsely argumentative way. She is already leaning towards the wall, is almost slumping beneath me. “Your father would be furious.”

“My father,” I say slowly, trying hard to form the words, “would approve. If he knew all the facts…and circumstances.”

“Cumyn is an accomplished writer and The Famished Lover is both a complex and compelling read. It is also that rare thing – a sequel that is the equal of an excellent, moving original and in some ways surpasses it.” Bruce Berskine, Halifax Chronicle-Herald