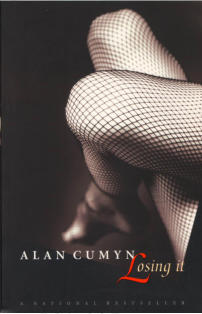 How she hung on his words. He could feel her heat rising. It was heady and he had a sense that he had to be careful, for himself as well as for her.

“Well, I don’t want to go on about it,” he said. “But you have a resonance, a sense of complexity of life and spirit.” He fumbled under the seat to pull up his briefcase, fought again with the combination before freeing the lid. There was the special package, still, thank God, wrapped in its thick brown envelope, and there were his conference papers, and there on the bottom was Sienna’s poetry.

“Here are all the basic ingredients for a fairly typical academic comedy of errors à la Kingsley Amis or David Lodge… But Cumyn’s comedy is both sadder and more sinewy than his material suggests. As each chapter shifts to a different character’s perspective, the reader experiences a kind of emotional variegation: a bold stripe of comedy yields to a paler, frailer shade of poignancy to a sudden black swath of outright distress. One minute the reader gets the low physical comedy of Bob… and rolls her eyes in grudging amusement; the very next page she sees Lenore wandering unsupervized from the nursing home, where a distraught Julia has had to commit her, to a nearby waterfall. Only her own immense dignity forestalls utter panic, and only immense luck staves off disaster. ‘Tragical-comical-historical-pastoral,’ as Shakespeare put it.” Annabel Lyon, The Ottawa Citizen

The day of my father’s funeral I stood in the doorway of the master bedroom and watched my mother weep. She was wearing a white slip, sitting on the bed with her long red hair tangled over her shoulders and her back to me. It is an astonishing thing to find your mother beautiful, in that way, at such a moment–I could not speak and I could not leave; all I seemed capable of was to watch with the silent, hawkish eyes of receding childhood.

“In this two-part coming of age narrative, Cumyn tells interconnected stories about fragmented, dysfunctional families and the lonely eccentrics they spawn. This is an intelligent and moving romance about two people who had just about given up on finding love when, miraculously, they find each other. Cumyn’s writing is so beautiful and convincing that it seems effortless, and his characters are so vividly realized that they stay with you long after you close the book.” The New Brunswick Telegraph Journal

The dean’s chopsticks flick into the big centre plate like deft claws and pull out a gigantic piece which he plops onto my plate before I can defend myself. He grins, showing all his teeth, stained and crooked, except for the silver one in front. ‘What did he say?’ I ask Li Ming.

‘He says you are young and can eat a great deal more!’

What makes this book such good reading? For one thing, Cumyn has a lot of interesting things to say about contemporary China… He also has a very keen eye and ear for the meetings–and misses–of the two cultures. When he writes about China, Cumyn has the advantage of a somewhat unusual subject. When he writes about love, and thus lacks the benefit of novelty, he still manages to do a fine job: Rudy’s transports of joy, his apologies of misunderstanding, and finally his obsession with his lovely translator, Li Ming, are all very convincing. Cumyn handles dialogue with a sure hand, and the disagreements between Rudy and Li Ming–and, back in Canada, between Rudy and his friend Lou–not only ring true, they say more about the war between the sexes than pages of reflection or theory.” Books in Canada

Waiting for Li Ming is available at better libraries near you!