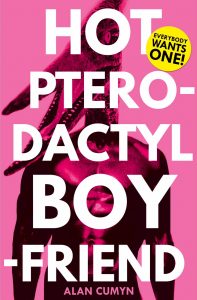 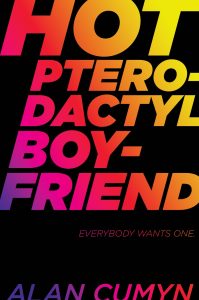 A sexy and charismatic pterodactyl comes to high school and completely disrupts the political ambitions – and well-ordered love life – of Student Body Chair Shiels Krane. Pyke is destabilizing, a Muse, a bad-boy boyfriend you can’t stop thinking about. He’s our unconscious, the beast in us, a metaphor of course but rather real, too. He infects our dreams, sets blood to percolate, his crest flames red when he’s interested. He smells fishy. It’s impossible not to watch him when he achieves flight, or when he explodes open his wings and is copied by followers carrying black umbrellas.

“Eighteen? He didn’t look a day less than sixty-five million.” “… a deliciously weird and original contemplation of personal metamorphosis, the intoxicating effects of lust, and the clarity that comes with experience.” – Publishers Weekly starred review

“This novel is not a gag – it’s both satirically brilliant and genuinely captivating. Millions of readers were willing to accept – in all seriousness – a sparkling vampire as a romantic lead. So why not a dinosaur? But Cumyn is never explicitly mocking and, therefore, keeps us fully immersed with the weird, darkly sexy taboo premise right up until the profoundly satisfying and nutty ending. This is a terribly strange experiment gone terribly right.” Shannon Ozirni, The Globe and Mail 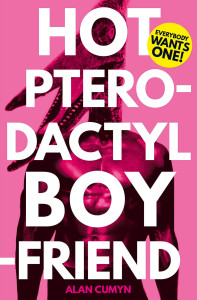 Alan Cumyn on the writing of Hot Pterodactyl Boyfriend.

Available in Audio from Brilliance narrated by Brittany Pressley.

It started as a speck in the east, a hint of black that might easily have been a crow. The sky was full of crows in late September, crows by the thousands with their squawking, nervy calls, the way they would mass on a stand of leaf-los­ing trees, a fractured black cloud of them. It might’ve been a lone crow, and maybe that was why Shiels turned her head and looked up.

She was stepping out of Mr. Postlethwaite’s portable class­room, his forgettable English class, already checking her text messages. Autumn Whirl was less than ten days away, and the band was not yet chosen. Rebecca Sterzl was never going to get a handle on that committee. Shiels would have to step in herself, but how to do it deftly, without setting off a bomb? She needed Rebecca to function still for lesser duties. And then . . . a speck. Maybe a crow? No reason to even look. But she did.

Was it before, or just after, that a worm in her gut bit her? It was such an odd feeling, an organ pain, almost—from something inside, sleeping somewhere, her plumbing per­haps, about which she had been completely unaware. It had never bitten her before. There was no reason to pay attention.

The speck got larger. Even from a great distance it seemed possible to tell that the wings were not usual. They arched and seemed, somehow, blacker than crows’ wings, and became larger even though the speck was not heading directly her way but moving in a zigzag. Then the wings weren’t actually black but a sort of metallic purple. Royal, maybe, or what a truly harsh band might wear at a three a.m. blast with spook lights and a lot of stage smoke.

That’s one face-rake of a bird, she thought—“face-rake” being the term that Sheldon had invented, having stepped on a rake a few weeks before.

Zig, zag. North-south, north-south. How to explain this weirdness to Sheldon? For three years they had shared news of everything fractured. Like the parakeet imperson­ating a baby on the bus, the video of which he had texted her, with commentary. And Principal Manniberg’s hair loss pills, which he had left out on his desk for Shiels to see, as plain as day, and which she had told Sheldon about later when they’d been hacking into the student newspaper blog because they’d lost the admin password and they were the only ones who knew it.

Or used to know it.

Now Sheldon wasn’t here, he was tutoring math lab in the south basement, so she had to be aware of every oddity for him, especially how the whole crowd of students simply seemed to know at the same time to cock their heads and gaze out over the sports field, the track. But the football play­ers didn’t look. They were all smashing into the tackle dum­mies and whatever else football players smashed into. The cross-country runners were on the track. They didn’t look either, but kept running in little clumps of legginess. Shiels was only vaguely aware of them in the first few moments.

More than twenty kids were standing with their books and backpacks, and their skimpy blouses and short skirts, with bare legs or thin pants—everyone shivering. Probably five were standing exactly like Shiels, with phones out, sup­posedly checking the world. But the world was forgotten.

One freaking huge royal purple non-crow was cutting a path through the gray sky to their little patch of green.

Crows play an unusual background role in the novel, as Pyke’s chorus, following him around, blackening the sky in odd times, spying on Shiels, even cleaning the occasional  gymnasium. Alta Vista, the Ottawa neighbourhood where Alan Cumyn lives, is famous for its crows: